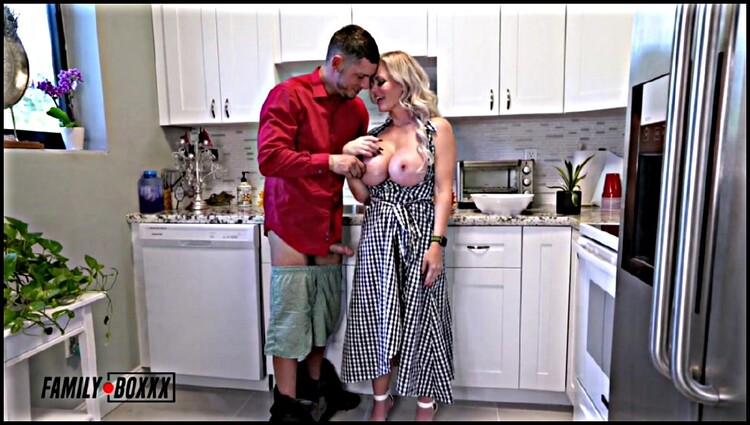 So here’s the deal. I didn’t have enough money to fly back to New York to see my Family on Thanksgiving this year. Don’t feel bad though, because luckily my Aunt Casca invited me over to her house for dinner. I hadn’t seen her since I was little, but all I could remember about her was that she had huge Knockers. I used to love it when she’d hug me and I could feel them big old Titties push up against my body. Needless to say I was super excited to get the invitation. When I showed up to my Aunt and Uncle’s house, my little step-cousin, Aria, greeted me at the door. She looked incredibly cute and was super flirtatious. Aunt Casca walked in from the Kitchen three seconds later and she gave me a big hug and a huge kiss right on the lips. It was a little awkward, but I actually liked it and I got an instant BONER. I think it made Aria a little bit jealous, because right then she gave me and her step-mother a mean glare. Once we sat down at the dining room table and started to eat Thanksgiving dinner, both Aria and Casca kept giving me the eye. In fact, as soon as Aria passed me the Butter, she started rubbing my cock with her hand under the table. I immediately got a stiffy. The weirdness didn’t stop there and two minutes later, Aunt Casca called me into the kitchen to help her. As I was pouring the gravy into the boat, she came up behind me and started to rub my cock. I almost spilled everywhere but I luckily I didn’t. As hot as I thought my Aunt was, I told her we shouldn’t do anything we’d both regret later on. Well, my Aunt didn’t want to here it and next thing I know she pulled out her huge knockers and shoved my face into them. Next she unzipped my pants and started sucking on my cock and balls. After that Aunt Casca sat up on the kitchen counter, lifted her skirt, and shoved my head into her crotch. She made me eat her out for a good couple minutes then I fucked her from behind. I was just about to shoot my load, but my Uncle was yelling at us to bring out the food. As soon as when we sat down, Aria began giving me a hand job again. Then a minute later she dropped her fork under the table and started to suck my dick so no one could see. I was literally about to blow my load so I got up from the table to excuse myself to the bathroom. The chaos didn't stop there and as soon as I was about to pee, My Aunt walked in and started to seduce me. Next thing I know I’m balls deep inside her again. I gotta tell you, it felt really good. I banged her for a good five minutes until she came all over my cock. Then she straightened herself out and walked out of the bathroom. After that, I sat back down and everyone ate dinner, but Aria wouldn’t stop playing with my cock. When it was time for desert, Aria volunteered to grab it from the kitchen. As I was sitting there talking to my Aunt and Uncle about School, Aria called from the Kitchen to help her. I didn’t want to go, but my Uncle insisted I help her. When I walked into the Kitchen, Aria was bent over the counter with her skirt up and her knickers around her ankles. She told me that I needed to eat her box then fuck her from behind, otherwise she was going to tell her parents that I tried to touch her inappropriately. Well I didn’t waste anytime and I did what she said. I fucked her in doggy style for a good few minutes then I shot my load deep inside her tight hole. After that we brought out the Desert to the table and finished our meal. As I sat there scratching my head, both my Aunt and my cousin smiled at me from ear to ear. All while my Uncle Bill stuffed his face..