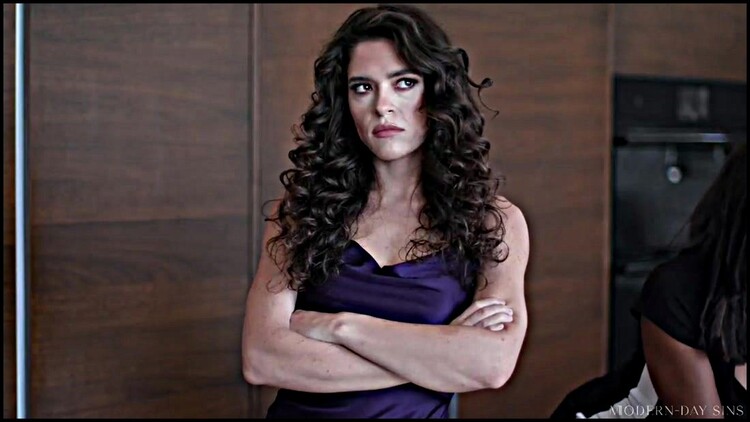 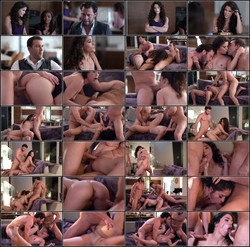 Victoria Voxxx and her husband Nick Strokes have invited two other couples over for a dinner party. The meal won't be ready for a few more moments, so Nick is chatting with the husbands, Seth Gamble and Will Pounder, while Victoria entertains the wives, Liv Revamped and Daya Knight. Liv and Daya boast about their adventurous sex lives, such as what wild positions they like to try out or how they'll incorporate sex toys sometimes. Victoria feels a bit out of place, and when it's revealed that she prefers the simpler, more traditional aspects of intimacy, the two other ladies begin to tease her for having a 'boring' sex life. The teasing becomes constant, and Victoria begins to grow irritated.A few moments later, everyone is seated at the table, partway through the meal. Victoria tries to smile, but it's clear she's still annoyed at being the target of Liv and Daya's teasing from earlier. When the group decides to go view an object of interest in the backyard for a moment, Victoria decides to hang back until they leave the room. She then crawls underneath the table, waiting for everyone to return. When the others return and take their seats, nobody notices that Victoria is hiding just under their noses- EXCEPT for Will and Seth, who can't help but notice that Victoria has unbuckled their belts and taken out their cocks.As the others continue chatting around the table, Victoria gives Will and Seth a double handjob and then starts blowing them as well. When it seems like it may be too much to keep hidden, Seth creates a distraction. During this time, Victoria manages to sit back in her chair and make it seem like she's just returned. Nobody is the wiser. Still hungry for more, however, Victoria suggests that Nick show the other ladies his theatre room. The women are ecstatic, and Nick escorts them with gusto, leaving Victoria, Seth, and Will to continue what they started.They move to the living room and the two men fully undress. They sit side by side on the couch as Victoria takes turns blowing them. She then gets between them and the men full undress her, sucking on her nipples and groping her body. Will then lies on his back as Victoria blows him in doggystyle while Seth fucks her from behind. Then, she rides Will in cowgirl as she gives Seth head, followed by Will pounding her in doggystyle as she continues to blow Seth. Looking to spice things up even more, Victoria sits on Seth in reverse cowgirl, shoving his cock in her ass. Seth gives her anal in this position as Will facefucks and lightly chokes her.Victoria then gets on all fours as Will fucks her from behind and she blows and rims Seth. Seth flips over and lets Will fuck her in missionary, sucking on Seth's cock as it dangles over her face. Will sits back on the couch, and Victoria climbs on top of him in cowgirl. Before long, she gets double-penetrated, with Seth fucking her in the ass and Will in the pussy. After this, she flips into reverse cowgirl, letting the boys switch holes. They then lift her and DP her in midair, switching holes again midway. She then kneels and alternates sucking their cocks while Seth and Will stand around her, occasionally facefucking her.Will lies back on the couch and Victoria rides him in cowgirl as she blows Seth. She then alternates between one of the guys fucking her in doggystyle while she sucks off the other. Seth then lowers her onto her back, so that she's lying in missionary, and he fucks her brains out as Will facefucks and teabags her. Seth and Will then cum all over her face as they stand over her, and she laps it all up. How's THAT for a main course?