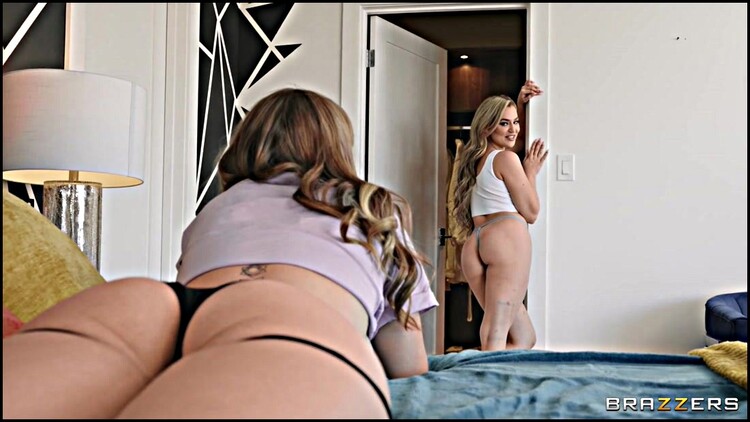 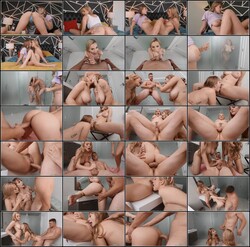 Blake and Angel are casually hanging out in their bedroom when Blake tries on a sexy dress that shows off her round ass. Angel playfully “makes it rain” on Blake’s booty, then decides to eat Blake’s wet pussy and scissor with her. Van, their pervy roommate, looks into the bedroom and likes what he sees. Both girls invite Van in, but he hears his annoying girlfriend coming. After Van’s girlfriend drops her towel, enticing him to join her in the shower, Angel bets Blake that she can’t suck Van’s dick before his girlfriend does, and Blake takes the bet. They sneak off to the bathroom, where Van’s girlfriend is giving him a handjob in the shower, Van’s eyes closed in pleasure. Before she can suck Van’s cock, Blake holds the shower door open so Angel can grab Van’s girlfriend and shove her out the bathroom door, which Angel closes and locks. Blake kneels in the shower and gives Van a BJ. He looks down and is shocked that Blake’s giving him the BJ of his life, but he goes with it leading to shower sex with Blake as Angel watches and masturbates. Van’s girlfriend pounds on the bathroom door but they ignore her. Angel wants in on the action and grabs Van out of the shower to fuck him in the bathroom, leading to Van getting to fuck both their wet pussies! Van’s girlfriend finally gets the door open just in time to see Van shoot cum all over Blake and Angel’s big tits and chases him out the door as Blake and Angel relax.