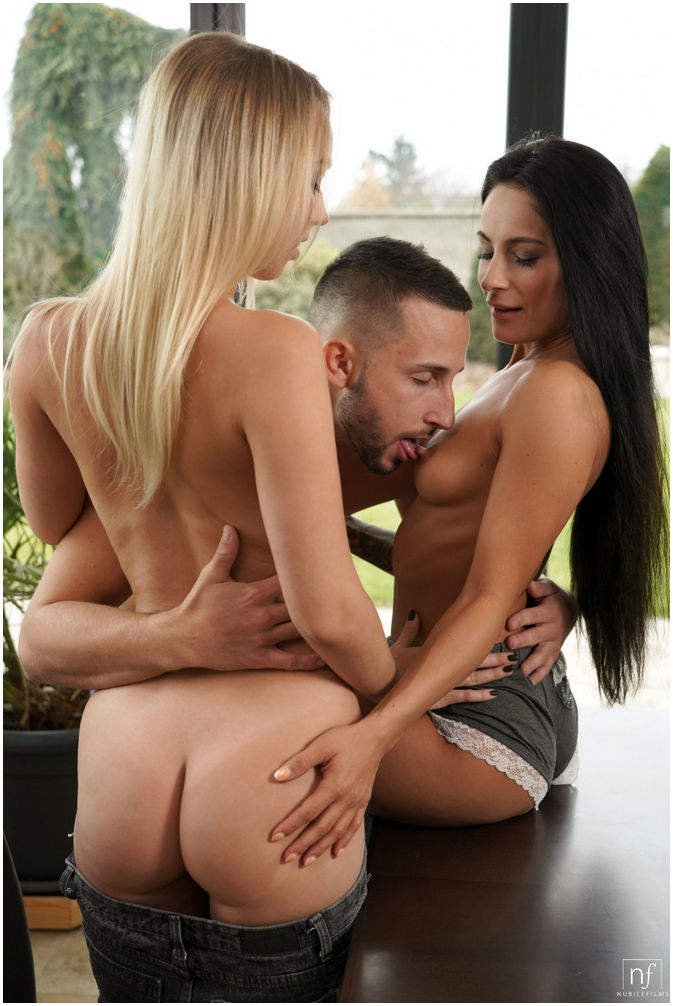 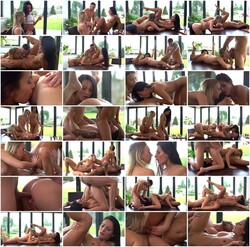 A game of chess between Mindy and Kira Thorn is growing heated in more ways than just one. When Jason X. passes by the windows, he sees his wife in her girlfriend's lap. The girls are much too distracted with their deep kisses to notice, but Jason taps on the window to let them know of his presence. When he joins them, he is all smiles and totally open to the promise of a threesome with his wife and her lover. He joins Kira before Mindy so that each can focus on a nipple They are quick to work Mindy out of her shirt and shorts, relieving her of her clothes so that Kira can bury her face between Mindy's thighs. While Kira keeps up with her pussy feast, Jason helps her out of her remaining clothes as well. When he's done, he joins her lapping at Mindy's greedy twat. Finding herself on her belly on the table, Kira reaches out once Jason has sprung his hardon free of his clothes to start stroking him. Meanwhile, Mindy kneels behind Kira so she can play her tongue over the soft folds of Kira's sumptuous pussy. She only lets Kira move out of the middle when Jason replaces her so that the girls can enjoy a double blowjob. Once they have had their ill of sucking cock for the time being, the girls each pick a spot on Jason's body to start riding. Mindy yields her husband's hardon to her girlfriend and settles on his mouth instead. Leaning forward to fill her hands with Mindy's breasts, Kira rocks her hips in a rhythm that Mindy quickly imitates. Kira eventually slides off Jason's fuck stick so Mindy can turn around and give him a reverse cowgirl ride. Jason helps her set a steady pace with his hands on her waist. Meanwhile, Kira does whatever she can to double down on both of their pleasure by stroking and sucking even as one of her hands creeps down to fondle her clit. The girls are eager to keep going, so Jason waits as they position themselves in a 69 with Mindy on the bottom. When he sees Kira's ass waving in the air, he grips it between his big hands and sinks his dick balls deep into her greedy wetness. Mindy's position beneath them lets her tease Jason's balls and enjoy the musk of her girlfriend's cream all over her snatch and her husband's hardon. Kira resumes her helpful licking and sucking as Mindy lays on her side with Jason spooning behind her. He can easily fill his hands with her breasts one last time as he drives into her fuck hole. As they bang, they each enjoy the sensation of Kira's mouth and fingers teasing all the right spots until Mindy is moaning and Jason can't hold back from nutting one more moment. He pulls out so Kira can stroke him off all over Mindy's belly, leaving her cum covered and content.